What tools do analysts prefer? Python vs. R: what's the difference? Take a closer look at our article to find out the answers to the most exciting questions in data science.

While softwares such as Excel and other are powerful tools, they have serious limitations. Excel cannot handle large datasets for example. The main weakness of other professional programs is that they are expensive and do not have an active community of contributors constantly adding new tools.

But there is a new sheriff in town. Actually, there are two: R and Python. They are the two most popular programming languages used by data analysts and data scientists. In recent years the interest for them and the awareness of them is increasing. Every year these two programming languages gain more and more popularity as you can see below in Fig 1. 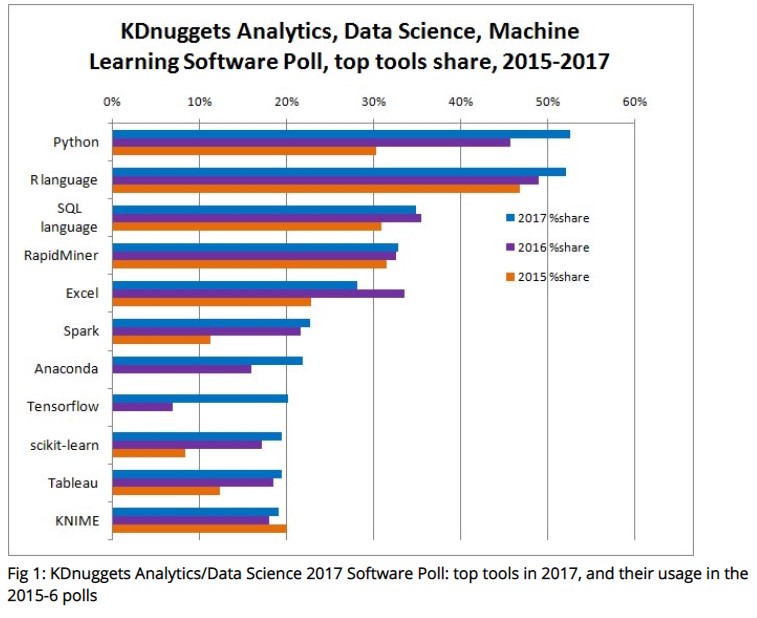 R is a leading programming language that allows users to create statistical calculations, graphs, data science and machine learning. R helps businesses as well because of its complete set of plug-ins and its communication infrastructure. R is well-suited for both engineers and business professionals.

Python is a multi-purpose language, like C++ and Java, with the advantage that Python is regarded easier to learn. Python has compact programming libraries for areas like math, statistics and machine learning. It was and is developed with a strong focus on applications.

But why are they becoming so widely beloved and acclaimed both in professional circles and among beginners? Why do companies like Google, Facebook, IBM and Mozilla use them?

Not only free, but open-source

Both R and Phyton are free to download and their open-source nature is one of the main reasons why they are the most favored programming languages around the world these days.

We can use them on any operating system. They are available to use both on Mac and Windows and even on Linux, just to name a few.

They can integrate with other languages (C/C++, Java) and with different data sources, including ODBC-compliant databases (Excel, Access) and others such as PostgreSQL and other statistical packages (SAS, Stata, SPSS, Minitab).

They have best-in-class tools for visualization, which are as important to businesses as they are to science, just think about different reports.

R and Python offer highly advanced graphical capabilities and allows its users to create histograms, scatterplots, line plots etc. These graphs are also easily customizable and can be made interactive.

R has a slight edge on Python in this department, because additional libraries such as ggplot2 and lattice make it the superior language for data visualization.

Cream of the crop

Python has remarkable tools for pure machine learning and deep learning as it seems to be more used by computer scientists than R is. Therefore, lots of machine learning libraries are better supported in Python than in R. If you are determined to become an expert of Deep Learning, Python is the way to go.

R, on the other hand, has traditionally been used by statisticians and data analysts, therefore it has more packages for statistical analysis. Because of the active community, including experts of different areas, most new statistical methods are usually available in R than in other softwares.

If you are torn between the two, remember that you really cannot go wrong since in large part both can do most of the same things.

In a nutshell, Python is easier to learn and is better for data manipulation, repeated tasks and strong in applications. R is better for statistical analysis and exploring datasets.